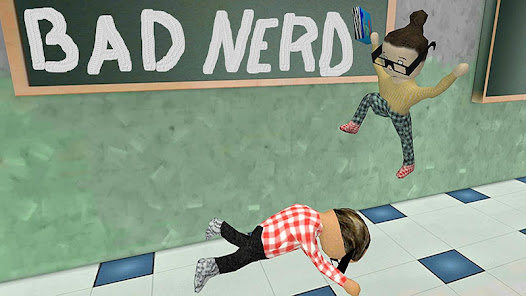 ** PLEASE SEE BOTTOM SECTION IF YOU HAVE ANY TROUBLE **

If you are a fan of modern action RPGs with lots of fighting then you will love Bad Nerd!

Join Bad Nerd in his quest to rid the school of bullies! You will be fighting all sorts of bullies, taking their lunch money to upgrade yourself with a wide range of weapons and armor!

* Multiplayer online mode is currently in BETA stage and an online arena is released for those who want to fight online unleashing their nerd rage on real people. Look for a new “Online Arena” door in the Main Hall!

This arena is the testing and brewing ground for the MMORPG feature that lies ahead in this game. As the game continues to be worked on, the multiplayer features will improve and eventually evolve into an open-world sandbox RPG MMO!

– Episode 2 (no spoiler comment, but for those who finished the first episode they know what I’m talking about!)
– Merge the multiplayer feature into the core of the game so that this becomes an MMORPG instead of just an RPG with death match smacked on top of it!
– Add more stuff to do in the school, like play with toys, or do homework, things that keep you entertained.

** If the game is SLOW or FREEZES at the start, please reboot your device to free up more memory to play the game. Any problems please leave a detailed description in the developer support below so we can get back to you. We cannot reply in the comments section so please contact us instead for any issues! Thanks! **